Three shows in and we get to the much needed day off.  In Richmond.  Finally.

I’m not sure people understand how much this gig beats you up.  Obviously playing the show is a physical thing…. I mean just standing for three hours is a physical endurance test.  Hang a twenty-five pound guitar around your neck and stand for that long.  Then there’s singing.  And in my case, screaming.  Then there’s jumping.  Every time that jumping stuff starts I’m thinking, “This could be it right here.  The last hurrah.  The final frontier.  The buying of the farm.”

I know this is going to sound like the wimpiest thing in the world, but there are two Victim songs where I wakawakawak the wah-wah pedal all the way through, so I’m basically standing on the other foot for the whole song… and my calf is killing me half-way through.  And my wah-wah foot cramps sometimes.

First world problems, or what?

On top of the three hour show there’s at least an hour of sound check as well.  And the in-ear monitors on the third day are like twisting thumb screws into the side of your head.

But hey now that the gig is over we can relax on the bus… which means sleeping in a box that’s exactly as long as your height (in my case anyway), that’s too small to sit upright in, on a two inch mattress that’s no more than a few inches above the rear tires which roar at about 80 db.  Every exit ramp, or rest stop, or traffic light is a wake-up jostle.  The temperature inside can vary anywhere between 50 and 80 degrees.  It’s like a road case for the musicians.

Okay, maybe I am a little bit.  All I’m saying is that the day off is welcome.  My body is beat up.  From the outside touring may seem like all sorts of glamour but it’s hell out here.  🙂

That said, the show last night was way more comfortable.  Being the third night it was the second time we played a lot of the new tunes and as such there was less concern about getting them right and more ability to relax into the cool stuff they have to offer.  And it’s only going to get better in that regard.

Okay, I need to sink back into my coma.  Only a few hours to go before we start all over again!!

Did anyone watch the new Star Trek Discovery premier?

I will say this: It’s all about preparation!

Ok, so let me back up.  The first show of the tour is especially nerve wracking.  And last night’s show included the debut of eight new tunes.  Couple that with the technical glitches that are bound to happen on the first show, especially one with this much specialized equipment.

So back to preparation.  The days before tour, or rather, the weeks before tour, are usually hectic.  Being away for three weeks usually means getting my life squared away before I go, as well as getting everything I need for tour squared away (see my Time To Pack entry) and that means my time is limited.  And there’s a huge difference between knowing songs and REALLY knowing songs.  Because when you really know a song there’s no brain activity involved.  It’s that muscle memory thing I’ve blogged about before.  But at this point, there’s no way that’s going to happen yet with all this new material.  So I have to rely on my brain.

And so I have a technique.  It’s a little time consuming but it definitely works, at least for lyrics.  I take each line and close my eyes and create a visual image of the line.  And I try to tie each phrase together… in the weirdest way possible!  Because you can remember bizarre stuff so much more easily than normal stuff.  So the weirder the better.

But the thing that worked for me was that on the second tune Robert took a solo and he just went off!  And kept going.  And kept going.  And I laughed.  And that was all I needed.  Now I’m relaxed.  And then a few tunes later my chops woke up and I was able to play whatever came to my head.  That’s the goal.  Relaxed and able to go anywhere.

And it’s so good to get that first night out of the way.

Oh, some people asked what I was reading and listening to.  As far as listening, it’s been all homework.  But after the show, Robert has the absolute best playlists.  It’s like a zillion old funk bands that you never heard of that are off the hook.  It’s great!

I’m currently reading Girl With The Dragon Tattoo, for the second time, because I want to read the next two in that series.  And now I guess some other author has continued that series?  I wonder how that is.

And I’m reading The Talisman by Stephen King and Peter Strawb.  I just read 11/22/63 by King and absolutely LOVED it and wanted some more King, but the Talisman isn’t holding my interest.  I read it years ago and really liked it, but it’s not doing it for me this time.

So, question of the day: fiction or non-fiction? 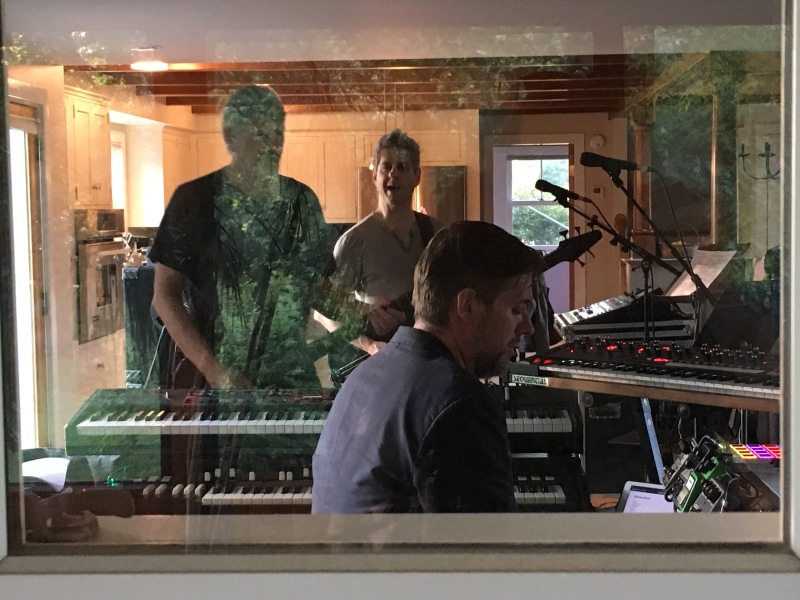 Rehearsals are over.  Time to pack!!!

So what do you pack for three weeks on a bus?  I mean besides the essentials. (I’ve forgotten toothpaste before!)  It’s actually a few days more than three weeks.  Maybe twenty-four days.

I mean, my gear’s already shipped.  So I don’t have to bring a guitar, amp or pedalboard.  Even strings are already on their way.

Picks!!!  Those live in my left rear pocket.  Always.  And I go through batches.  I use Dunlop 500 2.0 mm glossy so they never break.  But they wear down.  And so that’s on my list: refresh the batch of picks!

I’m bringing two book readers.  I’m reading books on both right now.  But reading on tour?  Does it happen?  Will it happen?  Probably.  I think I’m in the middle of three books.  And my lyrics are available on my Kindle and my phone!  A necessity!!

Tour buses are funny.  It can be state of the art regarding the entertainment systems, but it can also be a half a decade behind as well.  There’s always the question of how we’re going to hook up our tunes to the system.  So I bring a variety of connectors and adapters.  And even if you get everything plugged in it might not work.  I’m telling you, sometimes you need an engineer just to get tunes on the bus!!

Contacts!!  I’ve forgotten those, too.  THAT sucked!

As I’m typing this I’m organizing.  Three piles: suitcase, carry-on, and no-bring.  Plus, I have an ever-expanding list on Wunderlist.  Half of the anxiety of traveling is on my end.  Getting there and bringing everything are two anxieties that I can take steps to alleviate.  So I do.

Not to mention the anxiety of playing new material.  Lots of new material.  But that’s also the thrill of it.  New songs.  New sonic landscapes.  Pushing the stylistic boundaries…

Oh yes, and don’t forget to kick total ass and take no prisoners!!

Now back to packing…